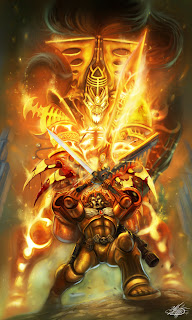 I am still not completely sure how I feel about the new rules. I feel GW is really trying to give people the notion that they are getting 'more' out of their toys by giving every model extra abilities.  I have absolutely NO issue with that.  My issue is that there seem to be a feel areas of needless complexity and I think we are all tired of Warhammer 40k having complexity..  See what I did there? :)

The list below is taking advantage of the new Flyer Rules and using three Storm Ravens.

Mephiston will ride in one all by himself.

The librarian, Corbluo and the Terminators will ride in another.

The Assault Squad will ride in the third.

I am not 100% sure about the inclusion of the Tac Sqaud below.  I am mostly taking it because I want to make use of the super sweet bolter/sternguard figures I just painted but I also think they will give me a little more durability (opposed to another scout squad) in the early and late game. I could be completely wrong considering I plan to hunker the Scouts and the Tacs down behind the Aegis Defense line with a priest near by for Feel no Pain and full plan to be gone to ground until all my Storm Ravens are on the table.

Once the Ravens roll on it is off to the races Zooming around and blowing things out the sky.

I believe the BA Storm Ravens are the number one 40k dog fighters in the game right now.  Three hull points and armor 12 is going to be crazy good combined with their full compliment of weapons.  The machine spirit can aim the bolters and ground troops while the missiles download into any enemy flyer along with the multi-melta.

The Librarian in this list has Blood Lance and Shield of Sanguinius.

The FAQ still states that the Blood Lance does not roll to hit so it is another option to take out flyers.  The Shield should give at least one Storm Raven a cover save not forcing it to Evade or Jink.

Corbulo is there for a little insurance and is likely not completely necessary but his 2+ feel no pain is going to really irritate some people I'm sure.

I will be testing this list over the next couple of weeks.  I thankfully stocked up on Storm Ravens BEFORE they got as expensive as they are now.

BTW, I am not talking about Mephiston yet because you should all know how I feel about him.  He is the warhammer 40k boogey man and this might be his edition to completely shine again with a 2+/5+ feel no pain.  His str 10 attacks will surely stop any nob biker shenanigans I am sure people will try and resurrect.

Please let me know what you think and if you happen to try the list let me know how it goes!

PS: I don't know who did this pimp picture I'm using at the top but it's awesome - thx.

How do you plan on deploying when you can't reserve more than half of your non-flyers.