Fifth Edition 40k is finally over and the last major tournament to feature it was the American Team Championship hosted by DiceHead Games in Cleaveland, TN.

I am very proud to say that we won the event for a second year in a row.  My team is made up of:

Casey not exactly 'new' to the tournament scene but this was his first year on our team due to Nick Rose having to drop this year for work reasons.

Casey really stepped up and did his best to score as many points each round as he could and it helped keep us in contention the whole way.

There is a real strategy that goes in to the army parings each round and Rob, Kenny and Thomas played their parts perfectly all weekend.

I give a sincere thanks to them for coming all the way across the country and playing with me. 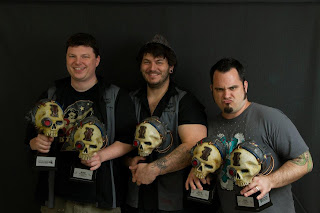