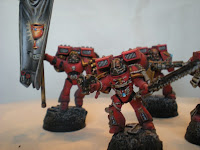 Some full battle reports complete with pictures are coming soon.  (Let me apologize in advance for my poor picture taking skills).

Over the weekend I had the pleasure of playing one of the top local tournament players with my all jump Blood Angels.

The first game he fielded a Space Marine list with 6 Ironclads, 3 Las Razorbacks, a Techmarine and a Librarian running with an assault squad in a rhino.  The mission was 'drawfest' from the main rulebook.  It did indeed end with as a draw but not for my lack of trying.  I was able to control my objective uncontested and attempt to swarm his objective via Descent of Angels.  Some epicly poor rolling on my part (6 str 10 attacks, re-rolling misses only resulting in 1 glancing hit on a Dread) caused me to stall out in the middle of the field.

With that said - the BA honor guard unit combined with the Chap/Lib and a host of storm shields did not fall.  It stayed locked 15 inches away from his objectives attempting to churn through ironclads.  The game went a full 7 turns and still - the 900 point unit that some said would never work did not fall... in your face :)  It's a fair enough trade, my super unit was able to tie up more than their own share of points and had I not took a trip on the fail boat with the rolling I would have blown through them on the top of turn three.

The guy I played was no slouch and he consistently made the right choices.

In the end I just wasn't able to make it through the wall of razorbacks castled up around his objective to contest.  I came real close with the sanguinor, a combat squad and one priest that almost slipped through the lines but he had too many guns over there.

We played a second game - this time with my jumpers against Chaos Space Marines.  In this list he was fielding 30 terminators with various marks (nurgle, slaneesh and tzeentch) Abbadon and Typhus.  He had a pair of 'generic' CSM squads as his troop choices to control objectives.

It was an objective mission again but this time with three of them scattered around the board.  I set up everything on the table (because coming down on turn 2 and getting assaulted by terminators is bad!).  I was able to send my Honor Guard of doom to one flank, supported by another assault squad and the Sanguinor and draw him out of the middle and split his impressive wall of terminators.

Once Abbadon got in the mix with the squad of Slaanesh terminators I had to commit another 10 assault marines.

This was enough to put the Despolier back in the box.  While that was going on I had sent 15 or so assault marines at Typhus and his remaining 10 terminators.  I was fortunate enough to have a priest with a lightning claw in the mix who allowed me to keep the combat resolution tempo in my favor.

By round 5 he had nothing left on the table and I was able to happily control all the objectives.

Again - the honor guard did not fall and their jump mobility proved critical in me being able to position myself on the battlefield where I needed to be to split his main forces (the 30+ terminators).
Posted by TPM at 7:20 AM

You really have got to take some pics of that awesome Blood Angels army of yours (please!).

What is your HG build?

What was your army build? How many points did you take overall for these battles? (Those Honour Guard look fantastic!)

Honor Guard as mentioned below.