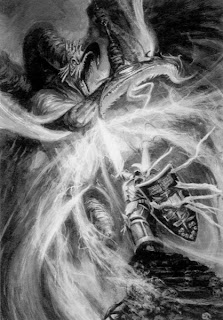 I am now almost fully recovered from the Adepticon weekend.  As always I had a blast and it was great to see some of the people I only get to see a few times a year.


My team did not win the Team Tournament this year but we did well, played some tough opponents and managed to come away from the weekend with a renewed vigor for next year.  I am very much looking forward to the next Adepticon.

In the singles competion I qualified for 'sweet sixteen' for the second year in a row but I have to confess - I hate the win/loss format.  It does not inspire aggressive play and the result of that is a lot of boring, boring, boring games.  The missions this year fed into the format and I think contributed to the boredom.

Let me state right here and now that the tournament was run very well and the people judging the event were awesome as well and my negative judgement on the missions and the format is in no way a reflection on them.  To be completely fair I wouldn't have 'seen' how boring the missions were going to play out until I played them.

In win loss people were mostly playing not to lose instead of to actually win and there is a huge difference.

I am smart enough to know how to move my pieces around the table for positioning and if no one fights then no dice are rolled so there are fewer variables as to how the game is going to play out.  It also makes the game very boring.

If I can find the time I really want to give my analysis on the game.

I don't know if you guys remember but a few months or so ago my 'draigowing' was floated around the net as one of the worst lists anyone had every concieved.....  Yeah.. I got 3rd best over all and had I not been dinged on sports by two ass clowns I would have won best over all at the 256 man tournament.

I lost the best of 16 due to a couple of rounds of bad dice and missions that were not tailored to ensure that armies actually have to battle to win.

In your face internet, heh.

I build and post lists that I genuinely believe in.  I have been playing this game a long time and I spend way too much time thinking about the 'meta.'  Anyone who looks at one of my lists and says it sucks just doesn't know as much about 40k as they think they do.  They are likely people who don't go out and compete at tournaments on a local level and much less on a national level.  Will that stop them from hating?  Heck no.. but do I care?  No.. I think it's funny.

I will say that my style of play isn't for everyone but I can build lists to fit anyone's style of play.  I also pride myself on being able to find a competitive build in every codex.  If you don't believe me then just ask!

I am sort of rambling at this point.

Win/Loss or Win or Go Home Tournaments are not as fun as Battle Point Tournaments.  I saw so many games decided by a tiny victory point tie breaker due to the missions not encouraging that people actually battle with their figures.  I can see how some people like it but it is easy to build a list that takes advantage of that format. You basically just make lists that go second and that can hide all game and then swoop in and contest or claim objectives on turn 5.

I love Adepticon and I sincerly appreciate the passion that the organizers of all the events there put into the events.  I just want next year's tournament format to be 'better' and I hope 6th edition helps facilitate that.

On the army front I think I am going to take a break from the GK or at least the Draigo side of GK and focus on something else for a while.  I've been putting together a few good vanilla marine list I am anxious to try.  When I get them tuned up for tournaments I'll post them.