This past Sunday I hosted a mini clash of the titans in my man cave.
Until recently I had been using proxies to represent my 1st company Blood Angel force.  I was really aching to get them on the table top and when I did I wanted it to be against a top notch opponent.
I invited a buddy of mine over.  He's no slouch and is one of the top tournament performers in the area.  A couple of years ago he won our local circuit of champions. He is known for taking somewhat unconventional lists that could be considered 'spoilers' for other tournament winning armies.
For the first game he took:
HQ
Librarian
w/ Null Zone
Tech Marine
2 servitors
Fast
10 man Assault Squad
Rhino
Troops:
3 5 man tactical squads
3 Las/Razorbacks
AND
6 Ironclads
w/ 2 hunter killers each
I took:
The Sanguinor
Librarian
w/ Might and Sanguin Sword
Jump Pack
Honor Guard w/ banner
Power Fist x 2
Melta Gun x 2
Storm shield x 4
Chaplain
Jump Pack
4 Assault Marine squads
All with two melta guns and power fists
The mission is 'draw fest' where two objectives are placed on the table top.  You have to control more objectives than your opponent to win.  90% of these games result in a draw when you are playing a good opponent unless someone gets lucky.
I won the roll to choose deployment and opted go first for no other reason that to test the viability of having the less favorable option for me.  I would have really liked to go second for the obvious reason of wanting to use the Descent of Angels after my opponent had already positioned, either moving around on the table or coming in from reserves.
I choose to hold everything in reserve.  My opponent does the same. 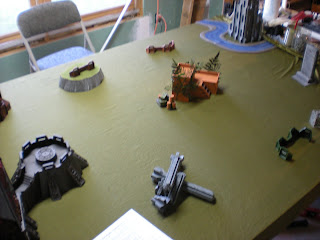 Our game basically starts on turn two.
I come in with the Sanguinor, the Honor Guard with attached Lib and Chaplain and one of my assault squads with a priest which I opt to combat squad.
He has nothing on the table. I scatter an inch or two from my desired locations and then run for a slightly more favorable position.
Bottom of two he has somewhat favorable reserve rolls and gets in four of his six dreads, his tech marine and one of his razorback squads.  He brings that RB on the table lined up at my objective.
He murders one of my combat squads down to the last man.  Thankfully that man had a melta gun.  I pass my leadership test. 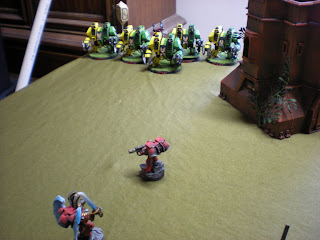 Turn 3 I get the rest of my army in.  He has a few thing left in reserve so I have to position a few units over near where he brought his RB just in case he comes screaming in with the rest of his force in the same area to make a serious push for my objective.
I opt to combat squad everything allowing me to have more options late in the game and split my melta guns up. 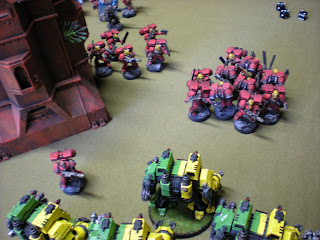 I don't have a lot of luck on my turn and only manage to kill one dreadnought. This should have gone a little better but it's a dice game.
On the other side of the field I take the weapon off of the Razorback and Immobilize it. 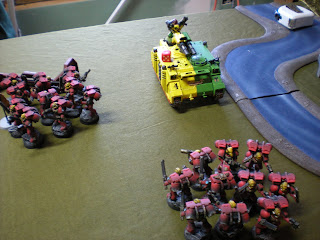 Bottom of Turn three he moves up and assaults me. As expected his ironclads made decently quick work of my Assault marines but he is in a good position for me to counter assault with my Super Unit.
He kills one 5 man squad and leaves only the priest in another squad who ends up breaking and getting away. 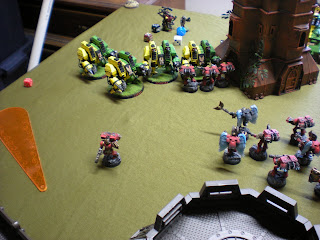 Interesting list your friend is running, seems like a hard nut to crack with the TM running around repairing things

The "John Deere" Dread Army. I remember reading or seeing this army somewhere. It is a fantastic paint job. Not to discount your army, but I liked his unique paint scheme from the first time I saw it on...dakka dakka?

Nice blog, glad I found it!


I have to agree with Moros, this looks like a particularly tough army for you to deal with, even with the amount of melta you are packing.

That is exactly what he does. He wasn't really able to get the tech marine in play this time because if he pushed him up too far I could just Jump over the dreads and engage him.

He's been playing that army for about a year or so, i think, and took it to this year's Adepticon. That may be where you saw some pictures from.

His army is definitely hard for my Jump BA's to beat. In this mission, where the objectives are tucked away in the far corners of the board he can just choke that area with tons and tons of mech.