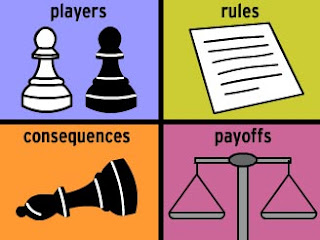 Non-Cooperative Game Theory assumes that any amount of players in a given game make decisions based out of their own self-interest.  This can easily be applied to a game of Warhammer 40k.

Once we know the game (or the mission in a game of 40k) we then can move on to establish a Nash Equilibrium. This is named after the same Nash that the movie a Beautiful Mind is based on. There are two types of strategies in these games – A pure strategy and a mixed strategy.


Pure strategies take for granted that there is only one possible best choice for any player to make.  There is no uncertainty in the player’s actions.


Mixed strategies takes for granted that players are not set on any particular course of action at the start of the game.  The players weigh the probability of each action and does not pre-commit to any of them.  In a game of 40k the almighty dice can do quite a bit of this strategizing for us and allows for us some variance in what our ‘best’ course of action will be in each turn.  It also allows for us not to have to play the same way in every game.


So how do we determine what the ‘best’ course of action for our opponent is?  During the play testing of your army you are becoming familiar with the strengths and weaknesses of your selections.  Many gamers choose to ignore these findings and just continue to play what is the most fun for them.


Is there anything wrong with that?  Of course not..  But when you are ready to try and win tournaments you need to pay very close attention to these vulnerabilities and seek to sure them up.  The very nature of this game and the variance of dice mean that we will always have weaknesses and the game state and what those weaknesses are can change from turn to turn.  We never expect that our leadership 10 unit will run off the board but every now and then it does.


To play our best and to assume the highest chance of victory in games we have to consider the Nash Equilibrium – that no matter what choice we make our opponent will counter with whatever his or her best move will be.    By identifying the Nash Equilibrium we can better determine the outcome of the game.  By envisioning the outcome – at each game turn – we can better ALTER the game if need be.  IE by considering these sorts of things we can snatch victory from the jaws of defeat or just move along making the dominant strategy every round and sail smoothly to a win.


Playing to win does not always mean seeking out the dominant strategy (a strategy that is always better than all others) but it does mean considering the ramifications of each of your choices when compared to the desired outcome.


You and your opponent know you are running short on time and both agree that the turn you are on is the last turn you are going to play.  The situation evolves to where your opponent sees an advantage he can gain if you press on to the next turn.  Looking at the clock you have 10-15 minutes left.  While it is us-sportsman like it is completely within his prerogative to appeal to a judge to ask that the game continue.


Your opponent makes a mistake and rolls a set of dice out of order or forgets to move a piece and is several units into his shooting phase and he ask to take it back.  You let him but state that if you forget something he needs to also take it back.  Sure enough you do something similar but he puts up a fuss about you wanting to go back and correct yourself.


I don’t expect you to draw out decision trees before you start moving your pieces around the table or draw up binding agreement every time you and your opponent discuss something.  I just want to sort of get inside your gaming mind and implant some food for thought as your plan out your next army list or sit down to play your next game.


Did you take a list that has limited vulnerabilities?


Do you consider several options and really look at the game state before committing to a move or course of action?


Are you putting too much faith into an opponent who may not be deserving of it in a non-cooperative game where you both benefit from winning?

Thanks for reading.
Posted by TPM at 9:40 PM