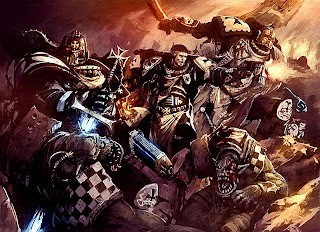 Black Templar take number one at the Feast of Blades.

Hey guys..  The Feast of Blades was this past weekend over in CO.  The winner of the tournament was BOLS guy Nick Rose.  Second place was none other that Next Level Painting's Kenny Boucher.  Third place was the dirty GoatBoy Thomas Reidy.

What do these guys have in common?  They are 3/5ths of the ATC tournament champions and all individual superior competitors in their own right.  Once again they are proving that they are the real deal in national tournament competition.

The Black Templars have benefited from a healthy dose of reverse codex creep and without further delay here is Nick's list.

I wasn't sure what to make of this list when I first viewed it.  This is a total 'old school' list that basically walks across the table and tries to beat face.

I really questioned the Land Speeders in the quantity they are in until I talked to Nick.  He uses the land raiders as mobile cover. That's cool but let me digress a moment as to why this is better than taking static shooting heavies.

Most tournaments will feature multiple missions where either you can't start on the board or where you will want to start in reserve.  This keeps your walking heavy weapons out of a good portion of the game.  Having these mobile fire bases allows you to threaten enemy armor more often.

The Marshal is a beast.  He is better than a Bear Lord for the space wolves due to preferred enemy.  He will be backed up buy some seriously hard hitting assault terminators.


The walking Crusader Squads most likely through a lot of people for a loop.  I am sure not too many opponents knew how to prioritize them on the target scale.  This is a huge advantage when you can throw your opponents off like this.  This is a list that I bet a lot of people would like to play twice. The first game they lose and the second game they have a much better idea of how it works.

The Emperor's Champion is no slouch.  He takes this army over the top.  I remember back in the day when people complained when they 'had' to take him.

This is just part of the coverage.  My man MBG has a lot of pictures over on his blog. Check it out here.

Congrats to Nick.  I am both proud and sad to say that his recent tournament wins are going to put him atop me on the HQ rankings board.  2012 is another year though and I plan to keep on swinging for the fences.

Stay tuned.. I am going to be posting some Necron lists soon.
Posted by TPM at 6:58 PM

I'll look around for some pics of his army and edit the post if I find them.