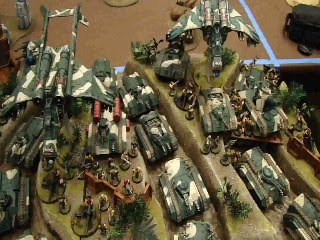 I was fortunate enough to attend a 1750 point tournament this past Sunday at Gigabytes Café in Marietta GA.  It is one of the best game stores that the Atlanta area has to offer.  The staff is friendly and knowledgeable and they have a full blown restaurant quality kitchen right in the store.


The Executioner is why I play this list.  It’s awesome.  Take it.. Love it..
My first game was against a Daemon list. I take terrible (no) notes so my details on his list is shaky.
He took Fateweaver, a Blood Thirster and ton of Daemon Princes as his core. He had a few plague bearer units to serve as troops and two units of three blood crushers.
I am not exaggerating when I say this game was over in seven (7) minutes.  He suffered from two mishaps on turn one, resulting in a destroyed blood thirster and a destroyed nurgle daemon prince, and the only thing he had on the table was Fateweaver and a unit of crushers.
The executioner picked up the crushers and the two psyker battle squads and the hydras dispatched Fateweaver.
The next turn he had another mishap that ended in a destroyer slaanesh daemon prince.  He extended the hand and then we had three hours to kill until the next round.
My second opponent was Dark Eldar.
His list was raider and ravager spam with a good mix of warriors and wytches.  I won the roll to go first but he seized the initiative. He destroyed three tanks, including my beloved executioner, and I thought I was sunk.  He was rolling hot.
On my turn my dice lit up as well and I grounded or shook 90% off his vehicles. He was almost completely on foot heading toward me at this point and it turned into a bloodbath.   I sat in my chimeras and murdered dark eldar for two more turns. We called it on turn 4 when he was out of figures.
Round Three was more of the same against Dark Eldar.  My opponent seemed like he might have been a little new to the game.  He was not prepared to deal with the firepower of the guard.
We called it on round 4 as well.  I ended the tournament with 142 out of a possible 150 battle points. I was unable to get all the bonus points in the second game because of the way the mission was written (basically impossible to get all the bonus points – it needed your opponent to cooperate with you in order to do so).
The missions were original and the venue was great.  There was some serious sportsmanship all around and that is about all you can ask for.  I was lucky enough to take home the number one slot and some decent loot at the end of the day.