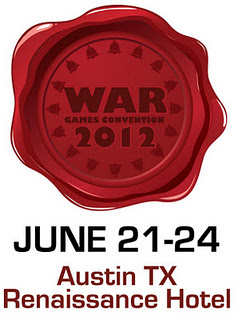 WAR Games Con is the most competition friendly tournament currently running in the US.  It boasts an impressive 7 game format and uses the battle point system.

This means that rounds are calculated like most RTTs that you're used to but points are accumulated over the course of SEVEN GAMES!!!!  This takes a lot of pressure off of each game allowing for a little wiggle room if you are not used to playing in a strange land or maybe had a little too much Adeptus Sauce the night before.

That isn't to say that peak play won't be rewarded by getting to spend the entire tournament on the top tables.

Seriously... this tournament is run by gamers for gamers and is every bit at the top of the heap alongside Adepticon (which I also highly endorse).

No matter where you are in the country it is worth the trip to Austin.

There are tons of events througout the weekend if the 7 game grind isn't for you or if you happen to bomb out on day one. ha!

I'll be competing in the two man team tournament in addition to the singles GT.  Who is with me?!

Link to registration can be found here: http://www.wargamescon.com/p/register.html