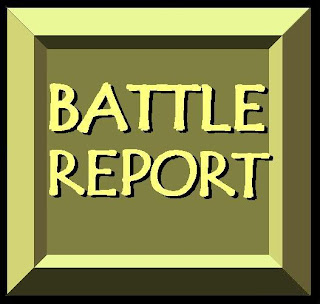 This weekend I was able to play a few test games and I made myself take a few pictures to post up here for you guys.

Here is the dark eldar list I played against.  It is a Web Way Portal list. The basic idea is that they start with only a couple of fast moving vehicles on the board.  The Dark Eldar player zooms up to where they want to drop the portals.  The portals are about the size of a blast template and for the rest of the game they count as their 'board edge' for bringing on reserves.  This means they can assault out of them and this can be quite potent if they drop them near your lines.

Deployment was Spearhead and the mission we played was three fold:
5 objectives
Table Quarters
Kill Points

To win the mission you had to win 2 out of the three above.

I roll a 5 for my Grand Strategy and make my dreadnoughts and my purifiers scoring.

The Dark Eldar player wins the roll to go first.  He deploys his Venom out of sight behind cover and his Raider behind a small amount of cover near the center of the board. 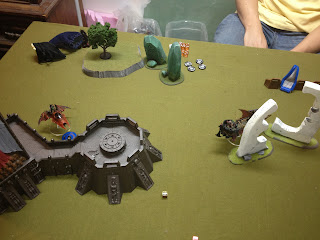 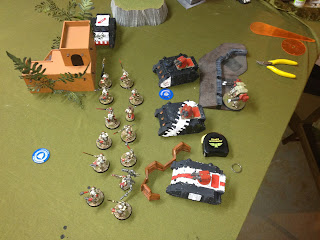 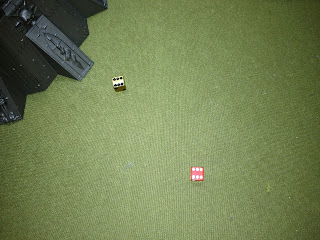 I then rolled double 6's to sieze with Coteaz.  He is a pimp.

I destroy his raider with my purifier squad.  I kill a couple of Dark Eldar on the passenger dumb and then lay the rest of my shots into that group.  I am fortunate enough to kill the guy holding the web way portal so it goes away - unable to be deployed.

On his turn 1 he zooms forward with his Venom and drops out the guy with the portal and activates it.

He also dropped out the dudes in the Venom to hold an objective that he placed out of line of sight behind the Fortress of Redemption.

I destroy the Venom, kill the homunculus and position myself to where I can start to creep over the line of sight blocking terrain to kill the dudes he left holding an objective.  I also wipe out the rest of the Raider squad in terrain.

On his round he rolls on two units of wytches, his two bike squads and the big unit of beasts.

The wytches come in from the portal and assault the Paladins.  The beasts move on as far as they can from the board edge and the bikes come and try to kill the rhino with their heat lances. They only manage to shake it.

They do stun the rhino.

The two squads of wytches fail to kill any Paladins and are routed from combat. 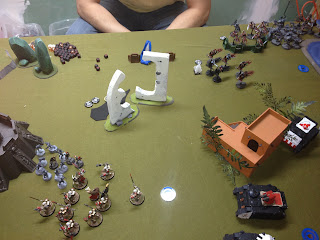 I shoot the remnants of the wyches down and got my purifiers out of the rhino to charge his bike squads.  I know they are going to get munched by the beasts right after but it was a sacrifice I was willing to make.

I get lucky and tank shock one bike squad off the board after removing the shaken from it.

I assault the other squad with the Purifiers and kill them and get ready to take the charge on my next turn from the beasts.

On his turn he rolls on VectDraigo was way out of range to get into the fight with Vect.  We fight and the Dark Eldar lose combat on wounds but stick in the combat.

He does kill the purifiers and moves his beasts to threaten the rest of the board. 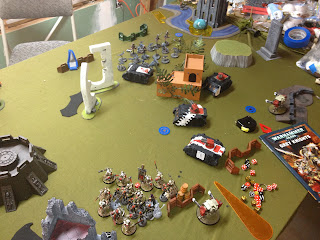 I move my tanks up a bit to get ready to move the next round and to make themselves harder to hit by the beast.  We battle a little bit more with Vect but that squad still doesn't die!

He does manage to put a few wounds on some paladins but I'm rolling fairly hot with my saves and not losing any models.

On his turn he does charge the tanks and stuns them both.  On his assault turn the Paladins also wipe out Vect and his unit.  He also charges on a Talos and assaults one of my dreads killing it. 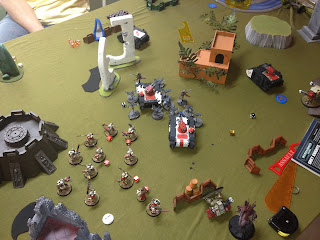 I remove the shaken from my Razorbacks and tank shock his beast off the board.

The Paladins advance and shoot the Dark Eldar troops camped out on the objective. Draigo leaves the unit and goes to kill the Talos.

We pretty much decide to call it at this point.  I have scoring units on 4 of the 5 objectives and have 3 of the four table quarters locked up and am very far ahead on kill points. 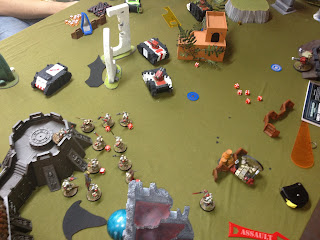 Thank you very much for reading this.  I know I do not write the most exciting battle reports.  We played two more games that day using the same Mission Objectives.
Posted by TPM at 8:46 PM