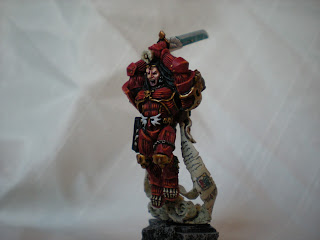 I have some good news to report from Adepticon 2011.

My buds and I won the National Team Tournament.  Team: I'm a Bear... Put Your Head in my Mouth.

It was so nice being able to play BAs on a competitive level again.

We ran 'big baals' blood angels where 3 of our 4 lists took one of the major special characters.  The 4th list used a standard librarian with a jump pack.  This was to ensure that we weren't left flat footed versus enemy psychers in the final round where we would be able to pick our team matchup.

More details to follow.. I promise.  I just wanted to give a quick update and give some serious appreciation to my teammates who had to endure me mother hening them for the last several months.

We picked up some serious loot too.
Posted by TPM at 5:30 PM