Clash of the Titans - C:SM vs Blood Angels - Part 2 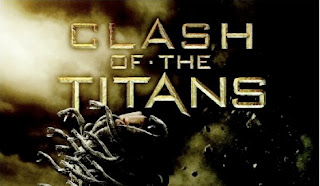 Thanks for checking back.  As promised here is part 2 and the conclusion to the Space Marine vs Blood Angels battle report.
Top of Four.
I charge in with a fury with my Honor Guard hitting two of the now unengaged dreads and the other dread that is mercilessly pounding on my Assault Squad.
I almost completely whiff.  My librarian with 6 attacks, at str 10, rerolling misses does a single glancing hit to the Dreadnaught facing off against the last three men remaining in the assault squad.  Talk about a total let down.  Of course I am used to it, my dice have been letting me down this whole game. 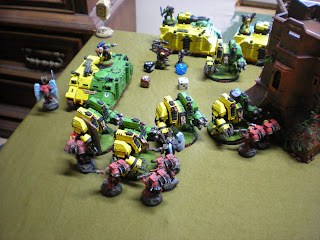 Well.. I must confess, not the whole game. I have been making the crap out of my storm shield saves.  I still lose my Librarian in this combat but only end up being down in resolution by 1.  I make my armor save - remember my HG are fearless because of the chaplain.
Bottom of four he comes on with his remaining reserves and starts to castle near his objectives.  I've finished off everything he has that can even remotely threaten my objective and have started to jump/run across the table to get to his.
In the major combat my HG with their storm shields are going toe to toe with the wall of dreads and I manage to completely kill one of them.
Top of Five I jump the Sanguinor, the Priest who rallied last turn and my other assault squads from the other side of the table towards his main force.  I don't have to be 'careful' at this point.  The game is already locked in a draw. If I play aggressive I might actually be able to pull out a win.
We are still slugging it out between the HG and the dreads.  HG are winning... take that h8ers.
Bottom of Five he moves even more of his tanks to castle up for real around the objective.  He runs one of his Ironclad into assault with the Sanguinor and puts a wound on him.  I might have forgotten to mention this before but that is wound number 2 for him. 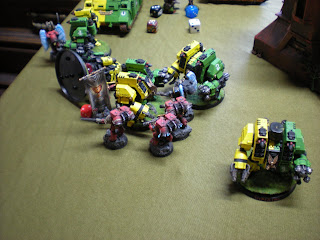 He takes out my returning priest with a las cannon.
We dice it and the game goes to 6.
Shooting is quick. I melta gun down one of the dreads.
I am able to jump a five man squad into difficult terrain and make a great difficult terrain role, needing a 5. I get a 6 and engage his tech marine in close combat.  I was hoping to kill him and survive somewhat unscathed and then leap frog off him to get closer to his objective.  I do manage to kill the Tech Marine but he also takes out 2 of my remaining 3 assault marines.  I jump off of him and do end up moving closer to the objective.
The Sanguinor loses his last wound and dies but of course will return to fight another day.
Still the HG are slugging it out. 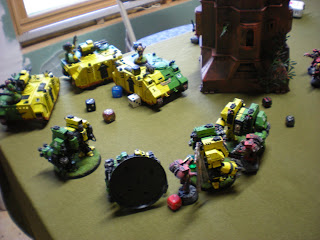 Bottom of Six he kills my last Vet Sarg making his way towards his objective and the HG still hold out in the middle of the dread carnage.
You can see from the last pic I've got about 10 more marines coming that direction to help out but it just wasn't in the cards.
The game ended as originally predicted - a draw.
Was a fun game.  All in al the only thing I wish had gone all that much differently was my Librarian.  Had he done what he needed to do I would have busted through that line of Dreads and it would have been a cake walk to win city. (a little sarcasm there) 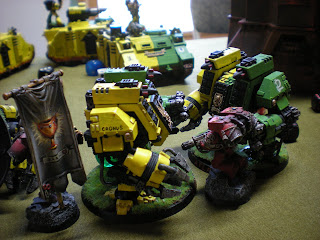 Next battle report is going to feature Chaos Space Marines led by Abbadon and Typhus vs. the Archangels.
32 Terminators is a hard nut to crack.
Posted by TPM at 6:45 PM

I really, really hate that mission.
Unless someone messes up it is a tie!
I would like to see those two armies face each other again with an objective mission with 4 or 5 objectives.
Good scrap though!

S10 still need to roll a 4+ to pen against AV13. Its not as easy as it sounds. You were the aggressor so to me that's a moral victory in itself. Hats off to your high flying BA. I definitely think an Epistolary with an Honor Guard with the Librarian is the way to go. You have to take out all the threats on the charge. I have also found that stormshields are the way to go. Vanguard veterans and Honor Guard both have ample access. You get your Priest built in with the Honor Guard so it's a perfect fit with the Librarian. He can only kill so much against death stars so that is his main weakness in my opinion plus no invulnerable save either if he's in power armor. Oh well. Great batrep, thanks for sharing bro .