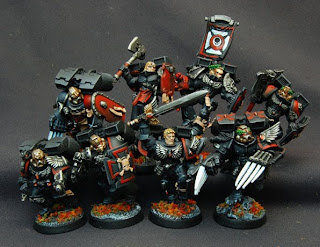 Steve is always willing to try new things. He doesn't just assume he knows how the game works like alot of players do.

Makes me wonder about having two smaller squads.

Can a IC move up to join a VV unit that used Heroic Intervention that same turn and then assault with them? If he joins will they be prevented from assaulting?

No, they can't use Heroic Intervention if an IC is attached.