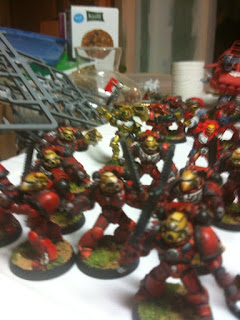 The Honor Guard: Should we use them?

I love the concept of the Blood Angels honor guard. I used them back in 06 for my grand tournament list despite them being horribly over valued point wise. I just really liked the idea of my Sanguinary High Priest being surrounded by fanatical followers of the Primarch. I ran them around in a Land Raider Crusader and had them kitted out with a couple of power weapon/fists and a melta gun.

There are a few reasons why these didn’t jump out at me initially.

With that said they do have a few advantages.

After some play tests the advantages seem to out way the disadvantages. The access to the special weapons without sacrificing that much close combat power is nice. I think the best special weapon combo will be two flamers and two melta guns. This gives them the ability to soften up hard targets or horde style units before they make a combined assault with one of your regular assault squads.

Because this unit isn’t scoring you can get a little more ‘daring’ with it and throw it directly in the face of danger without sacrificing your ability to claim table quarters or objectives. The flip side of that being in kill point missions they are somewhat vulnerable to high powered weapons and you don’t want to just fling them out there to be overwhelmed. In that case I think the best option is to keep them behind your walls of 10 man assault squads or tucked neatly behind your Rhinos and Razorbacks only bringing them out to deliver a calculated finishing move on weakened enemy units.

The hidden priest is nice. You will want this unit close to the action at all times and it further helps extend your FNP and FC bubbles. The FNP also helps this 5 man squad be a lot more survivable. With some decent rolling you’re almost immune to small arms fire forcing your enemy to dedicate more of their high powered weapons at them. This is also an advantage because outside of guard most armies just don’t have enough of that sort of thing to put too much of a dent in your FNP troops.

For just over 200 points you’re looking at a fast moving squad with 4 special weapons, a power fist, and a hidden force multiplying priest. You can save a few points by putting them in a drop pod (which is also a decent way to deliver and include Corbulo in your list). To answer the question originally asked I say ‘Yes,’ we should be using the honor guard.

They are not perfect for every list but they are valuable and do serve a very good purpose in most missions you’ll see in tournaments. You end up basically only paying 125 (and some change) more points for the HG than you would be paying for a priest with a jump pack anyway. For the force multiplier insurance I think it is definitely worth it.

From a modeling point of view the honor guard is an excellent excuse to kit bash and convert. These guys should really look like the best of the best of your army. Break out all the bits you’ve been saving in your boxes just waiting for the perfect occasion. The new Sanguinary Guard and Death Company boxes provide a vast amount of bits for just this sort of thing. Get Cracking!

I am a big fan of Vanguard since they can assault from the deepstrike. Honorguard are definitely hot as well.